Associated Press/Russell Contreras - in this Feb. 13, 2013 photo, statues of La Santa Muerte are shown at the Masks y Mas art store in Albuquerque, N.M. La Santa Muerte, an underworld saint most recently associated …more  with the violent drug trade in Mexico, now is spreading throughout the U.S. among a new group of followers ranging from immigrant small business owners to artists and gay activists. In addition to showing up at drug crime scenes, the once-underground icon has been spotted on passion candles in Richmond, Va. grocery stores. The folk saint's image can be seen inside New York City apartments, in Minneapolis religious shops and during art shows in Tucson, Ariz. (AP Photo/Russell Contreras)  less 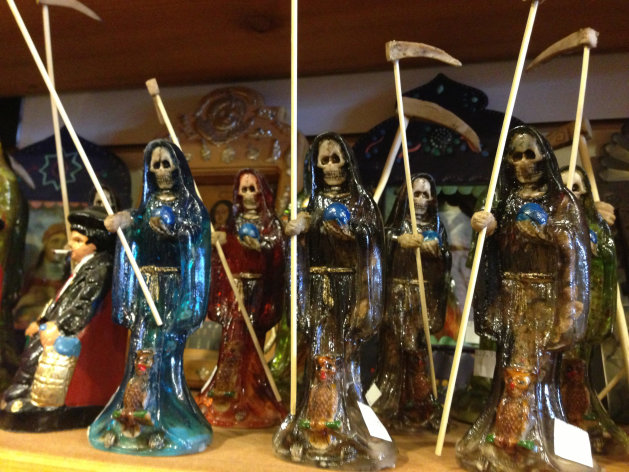 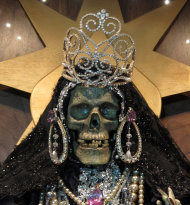 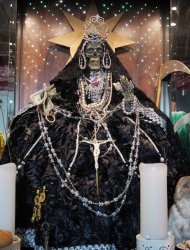 ALBUQUERQUE, N.M. (AP) — A follower in New Orleans built a public shrine in her honor. An actor in Albuquerque credits her with helping him land a role on the TV show "Breaking Bad." She turns up routinely along the U.S.-Mexico border at safe houses, and is sighted on dashboards of cars used to smuggle methamphetamine through the southwest desert.

Popular in Mexico, and sometimes linked to the illicit drug trade, the skeleton saint known as La Santa Muerte in recent years has found a robust and diverse following north of the border: immigrant small business owners, artists, gay activists and the poor, among others — many of them non-Latinos and not all involved with organized religion.

Clad in a black nun's robe and holding a scythe in one hand, Santa Muerte appeals to people seeking all manner of otherworldly help: from fending off wrongdoing and carrying out vengeance to stopping lovers from cheating and landing better jobs. And others seek her protection for their drug shipments and to ward off law enforcement.

"Her growth in the United States has been extraordinary," said Andrew Chesnut, author of "Devoted to Death: Santa Muerte, the Skeleton Saint" and the Bishop Walter F. Sullivan Chair in Catholic Studies at Virginia Commonwealth University. "Because you can ask her for anything, she has mass appeal and is now gaining a diverse group of followers throughout the country. She's the ultimate multi-tasker."

Exact numbers of her followers are impossible to determine, but they are clearly growing, Chesnut said.

The saint is especially popular among Mexican-American Catholics, rivaling that of St. Jude and La Virgen de Guadalupe as a favorite for miracle requests, even as the Catholic Church in Mexico denounces Santa Muerte as satanic, experts say.

Her image has been used on prayers cards citing vengeance and protection, which are sometimes found at scenes of massacred bodies and on shipments of drugs.

U.S. Marshal Robert Almonte in West Texas said he has testified about La Santa Muerte in at least five drug trafficking cases where her image aided prosecutors with convictions. Last year, Almonte testified that a Santa Muerte statue prayer card, found with a kilogram of methamphetamine in a couple's car in New Mexico, were "tools of the trade" for drug traffickers to protect them from law enforcement. The testimony was used to help convict the couple of drug trafficking.

Almonte has visited shrines throughout Mexico, and given workshops to law enforcement agencies on the cult of the saint.

"Criminals pray to La Santa Muerte to protect them from law enforcement," Almonte said. "But there are good people who pray to her who aren't involved in any criminal activity, so we have to be careful."

Gregory Beasley Jr., 35, believes he landed acting roles on "Breaking Bad" and the 2008 movie "Linewatch" after a traditional Mexican-American healer introduced him to La Santa Muerte.

Some devotees pray to the saint by building altars and offering votive candles, fruits, tequila, cigarettes — even lines of cocaine in some cases — in exchange for wishes, Chesnut said. A red La Santa Muerte, her best-selling image, helps in matters of love. Gold ones aid with employment and white ones give protection. Meanwhile, a black Santa Muerte can provide vengeance.

"She's my queen," said Arely Vazquez Gonzalez, a Mexican immigrant and transgender woman who oversees a large altar inside her Queens, New York apartment. Against one wall of her bedroom altar is a tall, sitting Santa Muerte statue in a black dress surrounded by offerings of tequila.

Gonzalez, who sports a tattoo of La Santa Muerte on her back, holds an annual event in August in the saint's honor, with mariachis and a feast.

"All I have to do I ask for her guidance and she provides me with what I need," she said.

The origins of La Santa Muerte are unclear. Some followers say she is an incarnation of an Aztec goddess of death who ruled the underworld. Some scholars say she originated in medieval Spain through the image of La Parca, a female Grim Reaper, who was used by friars for the later evangelization of indigenous populations in the Americas.

For decades, though, La Santa Muerte remained an underground figure in isolated regions of Mexico and served largely as an unofficial Catholic saint that women called upon to help with cheating spouses, Chesnut said.

It wasn't until 2001 when a devotee unveiled a public La Santa Muerte shrine in Mexico City that followers in greater numbers began to display their devotion for helping them with relationships and loved ones in prison. Economic uncertainty and a violent drug war against cartels that has claimed an estimated 70,000 lives also are credited for La Santa Muerte's growth.

Oscar Hagelsieb, assistant special agent in charge for Homeland Security Investigations in El Paso, said agents have found that most members of the Gulf and Zeta Cartels mainly pray to Santa Muerte while those from the Sinaloa and Sonora Cartels honor folk saint Jesus Malverde.

"Altars are very intricate. We have found some with food and others with blood from animals," Hagelsieb said.

The association with cartels and denunciations by some priests has resulted in some non-devotees destroying makeshift roadside altars. Recently, assailants smashed a life-size statue of La Santa Muerte in a South Texas cemetery. Police in Pasadena, Calif. recently found human bones at a home with a Santa Muerte altar outside. The owners say they bought the bones online.

But the vast majority of devotees aren't crooks.

"Most people who buy the stuff are regular people who just recently found out about her," he said. "Some probably have no idea about her connection to that other world."

One such devotee is Steven Bragg, 36, who said he was introduced to La Santa Muerte in 2009 and began praying to her for a variety of different reasons, including a plea for a life companion. Recently, the New Orleans man built a public chapel to her and holds rosary services that attract around a dozen people.

He also just formed a nonprofit to support the "New Orleans Chapel of the Santisima Muerte," the official name of his public altar.

"It's something I decided to do after all that La Santa Muerte has provided," Bragg said. "She has never failed me."